Thanks to Yasir Alhumaidan, camera man and editor of my first music video “Temptation,” I have a blooper reel to share with you 🙂

I wanted to give you an explanation of what’s going on in this blooper reel.

During this part of the video shoot, I’m doing a silly evil laugh as C.L. Manion asks me to act out the crazy/angry personality. I get clarification from C.L. Manion as to whether or not it is okay to mess up the hair she styled for me 😉

Here, C.L. Manion is asking me to give angry looks to the camera. It’s hard not to smile. 😛 Then my absolutely FAVORITE moment of the video shoot happens. C.L. Manion asks me to push at the camera. I’m not sure how to do it because it feels weird to push the air. Now this part isn’t in the blooper video but you need to know what happens. Yasir Alhumaidan says I can push him so that we can get a cool shot. Not expecting how hard I would push him—Yasir almost loses the camera 😉 …No pushing scenes ended up in the final cut 😛

At this part of the shoot, C.L. Manion is asking me to peek around the tree, and as you can see, I am having a hard time taking it seriously 😛

You can see how difficult it is for me to walk around in the woods with my signature heels on…they keep getting stuck in the mud.

I am having trouble taking peeking around the tree seriously again 😉

During this part of the shoot, I’m wearing my heels and have one foot on a fallen tree and the other foot on the ground. In order to keep my heel from sinking into the mud, I’m standing on a clipboard covered in leaves. The clipboard starts sliding away, and I almost fall over. If I wouldn’t have been so wobbly, this would’ve been a cool shot for the video 😉

In this part of the video, C.L. Manion is asking me to turn from the camera and walk away after I finish singing. I assume she means slowly, so I SLOWLY walk away from the camera. And then she asks me to walk faster because I was walking way too slow 🙂

At this part, I’m  so excited that we are wrapping up my first music video shoot, that I ask C.L. Manion to “Say it!” She doesn’t know what I’m asking, but after I tell her, and she says, “That’s a wrap,” I get super excited. Then, the blooper reel ends just as we get together for the following photo: 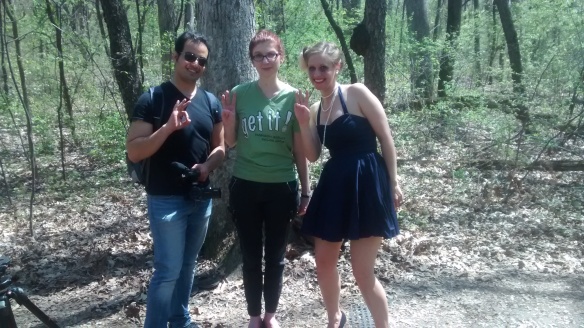 I really enjoyed the blooper reel that Yasir Alhumaidan put together because it was so nice to be reminded of how much fun shooting my first music video was. I feel so lucky to have had such a great team to work with!