Through my daytime job, I was given the opportunity to do marketing in Asia. I got to visit Japan and South Korea. I was super excited about this opportunity because I learned a lot about these two countries and also studied some Japanese in college.

I was rather nervous about my flight because the only time I had ever left the United States prior to this was my trip to Scotland…and they speak English there! 😉

I got up super early to catch my flight out of Dane County Regional Airport, only to find out that my flight got delayed three hours! Was it because of the snow? No. Was it technical difficulties? No. This was a new one: the pilot had the flu. Ever wonder what happens when a pilot calls in sick? Well, it looks like you have to wait a minimum of three hours 😉

I flew to O’Hare International Airport. Although my flight from Madison was delayed by 3 hours, United was able to find a connecting flight that arrived in Narita only 2 hours later than I originally had intended on flying in… Thank goodness!

My flight from O’Hare to Narita was a little over 12 hours long. I watched a lot of movies to pass the time, like This is 40, Hotel Transylvania, and Hitchcock. I very much enjoyed all of them.

When I arrived in Japan, I was super nervous and didn’t know where to go. I tried to create a question in Japanese to ask one of the airport attendants about which customs line to get into. After pausing in order to figure out what I was trying to say (My bad! ;-)), the woman responded in English about where I should go next. After customs, I didn’t have to worry about finding my bag. Through the help of some great websites (Thank you SheKnowsTravel.com and TravelUSAToday.com!), I managed to pack for 10 days in Asia using a carry on suitcase and my briefcase! 🙂

After immigration stuff was over, I finally found my friend who was waiting for me at the airport. (Boy was it nice to see a familiar face!) She teaches English in Japan and knows her way around the country very well.

We traveled to Chiba, where my friend lives, and my first meal in Japan was at an amazing Shabu Shabu restaurant. 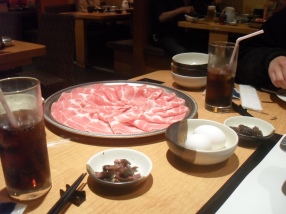 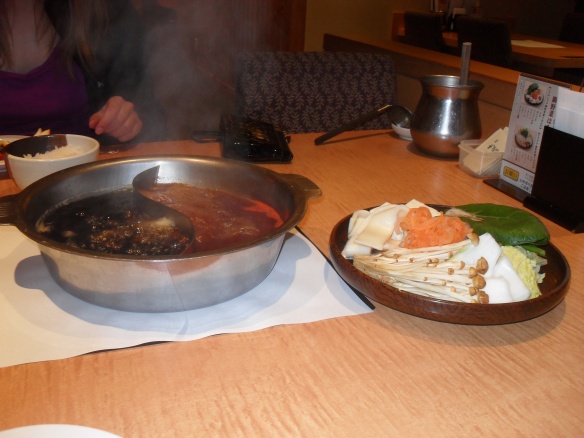 My first meal in Japan was super delicious!!! I recommend shabu shabu if you visit Japan.

Well, that’s all I can post tonight. I still have major jet lag from getting back from my trip last night. 😦