In a previous blog post, I wrote about the Mindfulness Leadership conference that I attended and how I found the content to be very valuable to me as a person and as a musician. At the conference, they had tons of books on mindfulness that you could purchase, and I bought four. 😉 One of the books I bought was The Mindfulness Revolution: Leading Psychologists, Scientists, Artists, and Meditation Teachers on the Power of Mindfulness in Daily Life edited by Barry Boyce and the editors of the Shambhala Sun.

One of the chapters in this book that I found extremely valuable was “Making Music” by Madeline Bruser.

I found this chapter to be extremely helpful because I connected so much with it. Bruser wrote,

“When others are listening to and looking at us, we feel on the spot and may look at ourselves with more doubt than usual. Even if we have prepared very well, we don’t know how our performance will go, and we may imagine the worst and start to panic.”

When I read this, I immediately thought back to my first show. 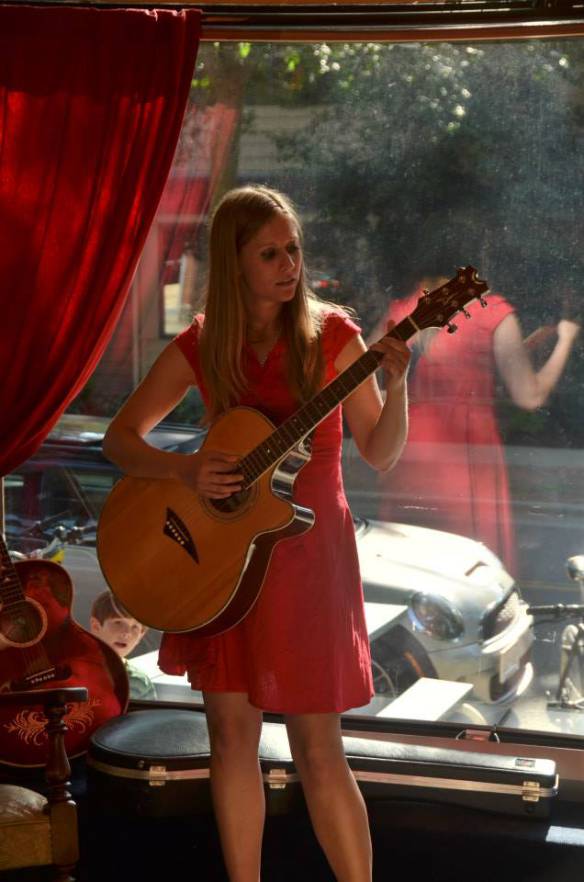 Performing at the Froth House
Photo by Nathaniel Hope

I was very nervous about performing for the first time!  I didn’t know if I was going to be able to play any of my songs because I felt so shaky.

You often hear that when someone tells people after a speech or performance that he/she felt nervous, people say, “Well, I couldn’t tell!”

However, my experience was the opposite at my first show. After the show, someone came up to me and said, “You did a great job! But, boy could you tell you were nervous. Your legs were shaking.” 😉 Oh well!

I’ve definitely come a long way with dealing with stage fright since my first show. However, it is still something I regularly work on…with the hope that one day it will stay away for good 🙂

I wanted to share two things I found in “Making Music” that can be extremely helpful for overcoming stage fright.

The first thing was when Madeline Bruser said,

“In order to become confident onstage, we need to make a basic shift in focus: instead of worrying, ‘What do they think of me?’ we can learn to think, ‘I want to give them something.’”

I definitely struggle with worrying about what the audience thinks of me when I perform. Although worrying does no good, I struggle with ridding myself of these thoughts. Changing these thoughts to “I want to give them something,” as Madeline Bruser suggests, is a great idea. When I try to tell myself, Don’t worry about what the audience thinks, it’s the same is saying, Don’t think about a pink elephant. Of course you think about what you’re telling yourself not to. The best thing to do is to replace your thoughts with something positive.

The second thing that I really liked from “Making Music” was Madeline Bruser’s mindfulness meditation. Bruser created a mindfulness practice in which she says,

“those who have tried it have found it very powerful in transforming stage fright into confidence.”

When I read that line, I immediately thought, Alright, I’m interested! 🙂

There are 3 parts of this practice. Bruser says, that first you should

“reflect on…people and experiences that have inspired, encouraged, and supported you in your journey as a musician from the beginning until now.”

Next she says, you should

“reflect on your own goodness, that you are able to receive this great inheritance.”

“reflect on the goodness of your audience, including every audience you will ever have extending into the future.”

She explains that your audience

“[comes] from many different backgrounds, but they are all human beings like you, and your job is to connect with them.”

When I think about Bruser’s ideas about what a performer’s role is, I feel very silly that I get nervous about performing.

Madeline Bruser’s “Making Music” is an excellent read. I strongly recommend it!

I look forward to trying out the tips I gained from Bruser’s article, at my next show!

I subscribed to Madeline Bruser’s E-Zine, “Fearless Performing.” If you struggle with stage fright, I would encourage you to do so too 🙂