Friday was an exciting night! I got to see two awesome musicians perform, and I got to perform on bass!

The Sunday before last Friday’s show, I was asked by Jimmy Murn if I wanted to be a guest musician at his show. Absolutely I wanted to!

On Sunday, I started learning the songs  I needed to know for Friday’s show. I hadn’t played a lot on my bass up until that point.

I like to practice A LOT before any performance, so last week, after spending each day at my full-time job, I spent all of my free time practicing.

The show on Friday was at the Glass Nickel Pizza Co. I was very excited! (As you can see in the photo below 😉 ) 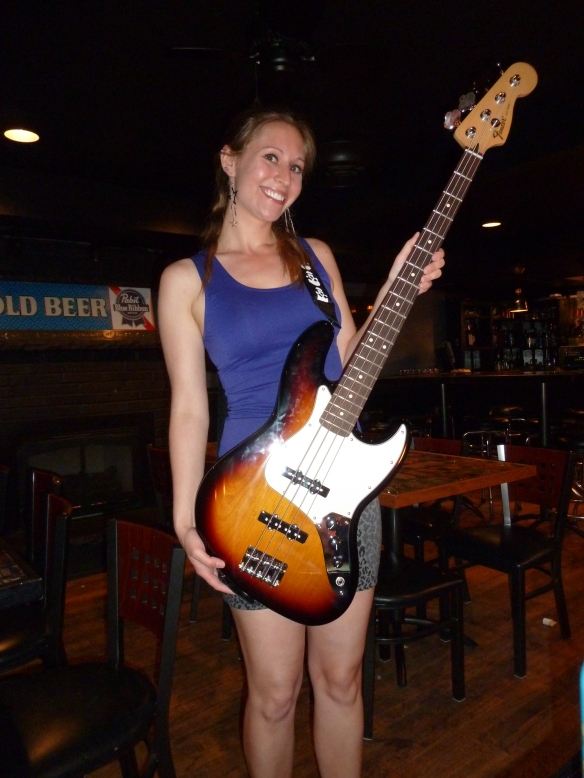 The show started with Teddy Davenport. Teddy has a fantastic voice, is a very skilled guitarist, and can play the harmonica and guitar together! He’s got great songs! You can listen to some of Teddy’s songs here.

After Teddy performed, Jimmy Murn came on stage to do his set. You can listen to some of Jimmy’s music here.

After he performed a few songs, I got called on stage to perform songs on bass with him. It was a lot of fun!

I also got to do some backup vocals 🙂

It was so nice to be on stage again after two months of not performing!

I feel very grateful to have a friend like Jimmy Murn. He is my music mentor. 🙂 He challenges me, and he helps me become a stronger musician.

He believed in me that I could learn songs and be ready to perform them in four days. (I was more than a bit nervous about this!) But, I was able to do it! 🙂

I hope to perform again soon!